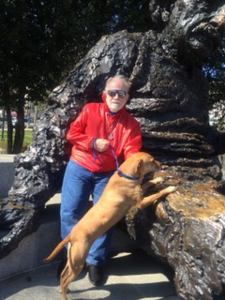 Commander Lawrence W. Kozoyed, USN (Ret) founder of the IFM served with distinction on active duty from 1958 until 1980.  Having enlisted as a seaman recruit he advanced quickly and was commissioned as an Ensign in the Engineering Duty Only Corp. He received his commission having been selected for a full scholarship in the Navy Enlisted Scientific Education Program, NESEP.  He graduated magna cum laude from the University of Oklahoma with a degree in engineering physics.  He was designated Loyal Knight of Old Trusty, LKOT #420, a lifetime honoree. His Navy assignments included duty as a staff nuclear power engineer with the Division of Naval Reactors, NR under VADM Hyman G. Rickover:  Asst. Nuclear Power Superintendent, Submarine Type Desk Officer, USS Sunfish Ship Management Officer, and Submarine Overhaul Manual Author/Editor at Norfolk Naval Shipyard: Submarine Systems and Procedures Manager at the Naval Safety Center:and Quality Management Officer at Supervisor of Shipbuilding, Newport News.  Commander Kozoyed also completed graduate studies in nuclear engineering at the Westinghouse’s Bettis School and received an MS in Mechanical Engineering at the Naval Postgraduate School in Monterrey, CA.

Following retirement in 1980 Commander Kozoyed entered private industry and was employed at the Newport News Branch of one of the largest independent naval architect firms in the United States: M. Rosenblatt and Son, Inc. (MR&S, Inc.) He quickly advanced from program manager to chief engineer in his second year with the firm and in 1985 he was named a VP and manager of the Newport News branch.

Searching for a new perspective

Commander Kozoyed resigned his position with MR&S in March of 1989.

During the mid 1980‘s he began new studies in Depth Psychology ( the works of Carl Gustav Jung ) and the possibilities for new advances for integral relationships between science and religion as found in the works of Pierre Teilhard De Chardin.  During this time a passion began to develop deep within his psyche, a passion at first kindled like a small fire but a passion which grew to very strong urge to emerge.  And what emerged was a strong desire to connect science and religion.  He believed that if this new reality could be achieved then a whole new world view would emerge and a true paradigm shift in our ability to function authentically and responsibly both personally and universally.

He also knew that in order to allow his passion to emerge and achieve this discovery he would have to put his lifelong pursuit of the world of objective science aside while he devoted himself fully to a pursuit of understanding the world of the soul and spirituality.

With these objectives in mind, IFM was established in 1989 to assist in the process of researching, developing and sharing these ideas with the public.  One-on-one mentoring of individuals and groups and facilitating workshops, seminars and retreats followed.